The location of Milldale sits between Silverdale, Millwater, Wainui and Dairy Flat.

Ahutoetoe School is located in the heart of the modern, connected development of Milldale. The Milldale developers derived the name from the local European history as Kauri trees were milled from the land in the early 1800's, as far inland as Wainui. The land forms a natural undulating valley that is drenched in northerly sun and keeps many features from before development such as the rivers and native bush.

The name Milldale derives from the Kauri that was milled from the land in the early 1800's, as far inland as Wainui.

Toetoe are an iconic part of the New Zealand landscape and our largest native grasses. They are resilient, abundant and found in numerous locations all across Aotearoa. Before development, this area of the Hibiscus Coast was a wetland used by different iwi to transport kai (food) to and from the east and west coast. Pūkeko, meandering rivers and toetoe were plentiful. Traditionally, Māori harvested the flower stems, known as kākaho or pūkākaho, to line the walls and roofs of whare (houses/buildings) and were sometimes used for weaving mats and baskets, or to cover food in the umu (cooking pits). The stems are still used in tukutuku panels today. Historians share that the hollow stem of the toetoe was used to symbolise the acquisition of knowledge at the wharekura (school of learning).

Milldale through the ages

Bordered by the tributaries of the Weiti River to the south and Orewa River to the north, the area of Milldale was once a densely forested valley and wetland, where Māori made good use of the wealth of resources. Small pā (settlements) were located alongside the rivers, providing easy access to freshwater crayfish and mussels, eel, flounder and waterfowl. Within the forest, Māori were adept at snaring and hunting forest birds; gathering fruits and berries for food or medicine, harvesting flax for weaving, and felling trees for waka.

With the arrival of European settlers in the early eighteen hundreds, the valley’s large Kauri trees and perfectly placed river access provided an opportunity for new local inhabitants. Timber mills and gang swayers were set up to process the felled timber under licence and milled it on site, then it was transported with the aid of river networks for use as building material to support the growing Auckland demand. Partially cleared, land was then purchased and surveyed into smaller farm lots that were rich in Kauri gum and later planted into orchards.

Rapid growth followed as a rich landscape provided the increasing number of settlers a steady source of work. Villages and townships were developed and families established their base to prosper throughout the district. The area grew its reputation as a place of great opportunity, founded by like-minded individuals forming a supportive community spirit. Access to local beaches and the coastal lifestyle also provided an idyllic setting to relax and enjoy time with family and friends.

Within the 21st century, a busy retail centre, commercial and industrial zones, plus health and recreational facilities added to the growth of the local area, providing an ever increasing source of employment for its residents.

Now capable of providing a complete and balanced lifestyle, this enviable community has the foundations to sustain an ambition to live, work and play in connected and desirable neighbourhoods. Milldale now offers that opportunity, pioneered by all those who have gone before, established for generations to come.

The naming of roads within Milldale used a wealth of local history to draw inspiration, beginning with the Māori, then early pioneers and European settlers, on to the families, activities and events that shape the community it has become today. Historical information has been sought and collated with the aid of the Manuhiri Kaitiaki Charitable Trust representing Iwi and early Māori activity, The Wainui Historical Society, Robin Grover and her many books, local landowners and families of significance.

The Māori name for the road describes the division between the water and dense forest. The road leads from the motorway entrance to the Milldale area, running through the development, past streams and thickets and ending at the entrance of the school.

On the south side of the Orewa River, above the main road, there was once a pā which would have controlled access over and along the Orewa River and would have protected the local Māori people who lived along its shores. The Orewa River provided a route inland from the coast. Whangaparaoa Peninsula Māori settlements were built close to their Mahurangi fishing grounds. A tidal river that flows through the Silverdale area was named Te Weiti (the little water) by the Māori who used it as a waterway. There is an interesting legend that Pokopoko, a Maori leader, slayed a Taniwha (mythical water monster) located in a deep pool called "Te Rua-taniwha" up river from here. 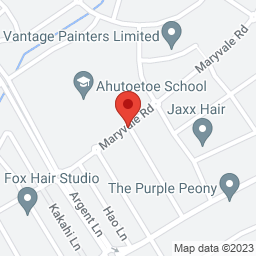